The volume of these aquarium leaves you speechless but also offers you the chance to learn something new. The exhibits are not only fascinating but also very informative. This is the list of top 10 largest aquariums in the world.

First place is taken by the S.E.A. Aquarium which is currently thought to be the lagest aquarium in the world. It has more than 10,000 sea animals which live in 45 million liters of water. There are 49 zones in the tank which mimic different real living conditions from the Southeast of Asia. 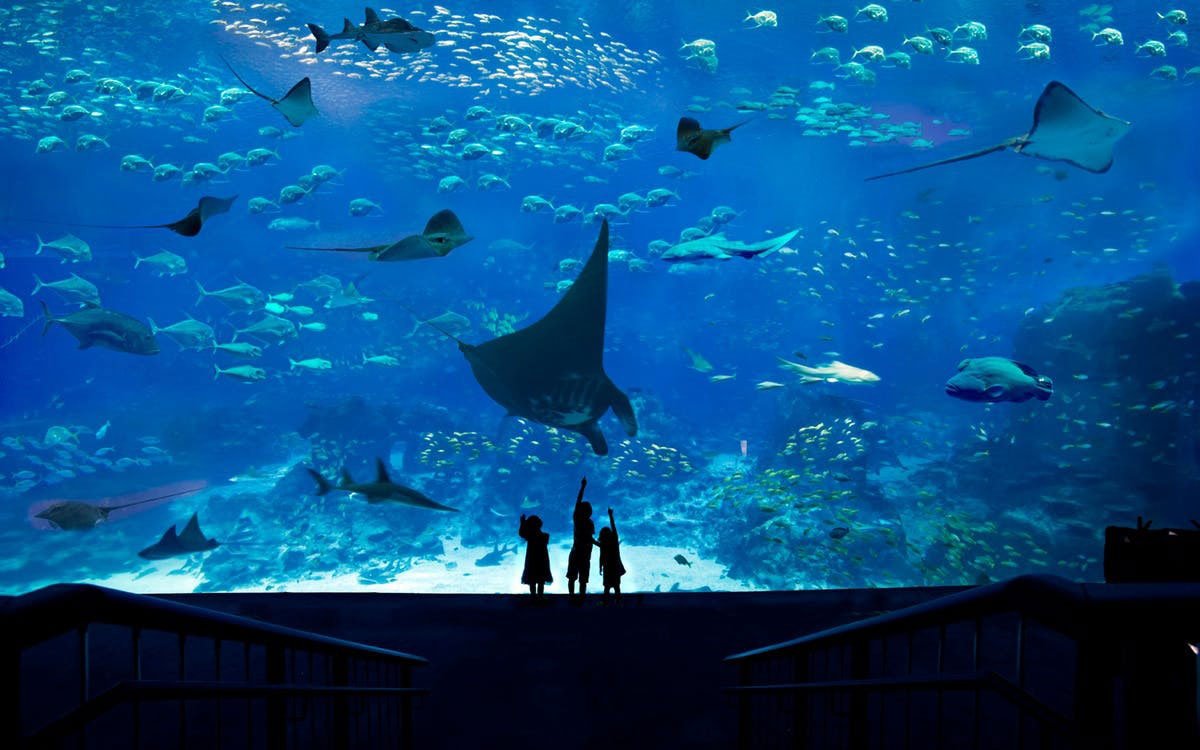 This aquarium was until recently the lagerst aquarium in the world. 120,000 animals can be found in this tank. An interesting piece of information is that this is the only place outside of Asia where you can see whale sharks. This was also a thing of controversy because two whale sharks died in the aquarium.

This aquarium was opened in 1930 and up until 2005, it was the biggest in the world with 11 million liters of water in its main tank. 1500 different animals live inside the tank. There are several permanent exhibits at Shedd: Waters of the World, Caribbean Reef, Amazon Rising, Wild Reef, and the Abbott Oceanarium. 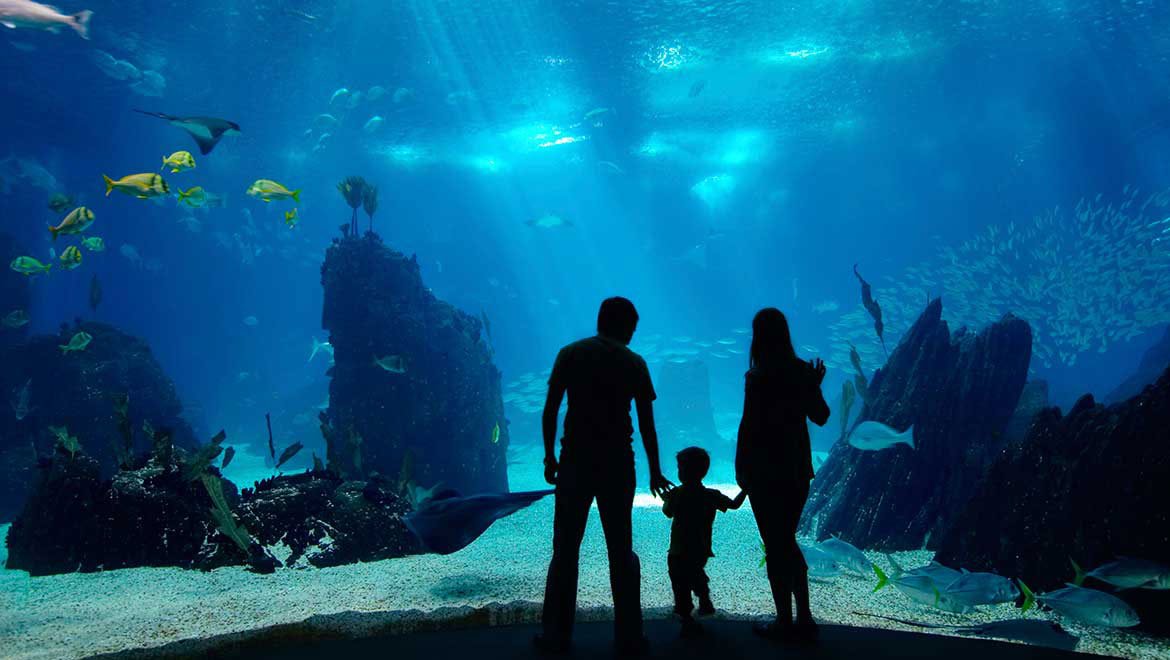 In the central part of the world’s biggest shopping mall, Dubai Mall, there is an aquarium with 10 million liters of water and the biggest acrylic plate in the world. The panel measures 8.3 by 32.88 meter (27 by 108 feet) and is 75 centimeters (30 inches) thick, only slightly bigger than Japan’s Okinawa Churaumi Aquarium panel. The tank is a home for over 33,000 sea animals, including around 400 sharks and stingrays combined. 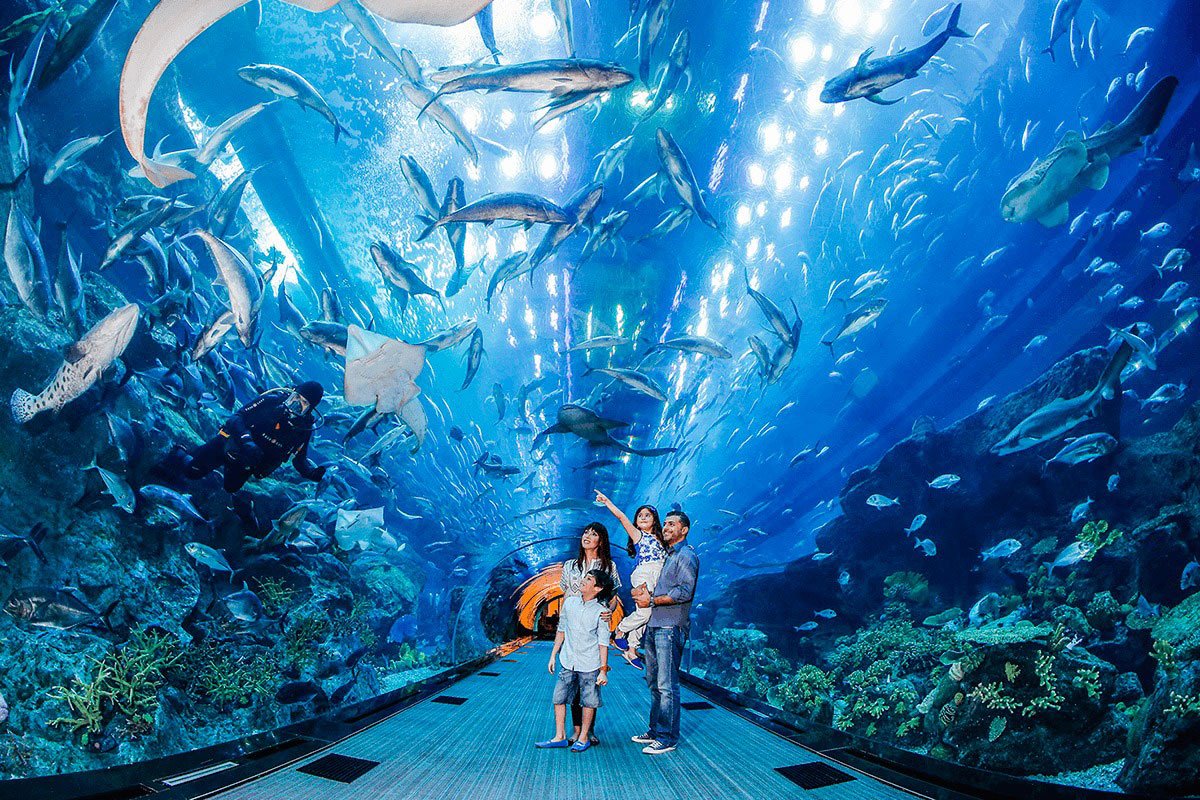 Okinawa Churaumi Aquarium which was opened in 2002 is in the fifth place. The main tank contains 7,5 million liters of water and when it was opened it had the largest acrylic panel in the world. The name of the aquarium comes from the Okinawan word “chura” which means “beautiful” or “graceful” and “umi” means “ocean” in Japanese. Whale sharks and manta rays, among other fishes, are kept in this tank. 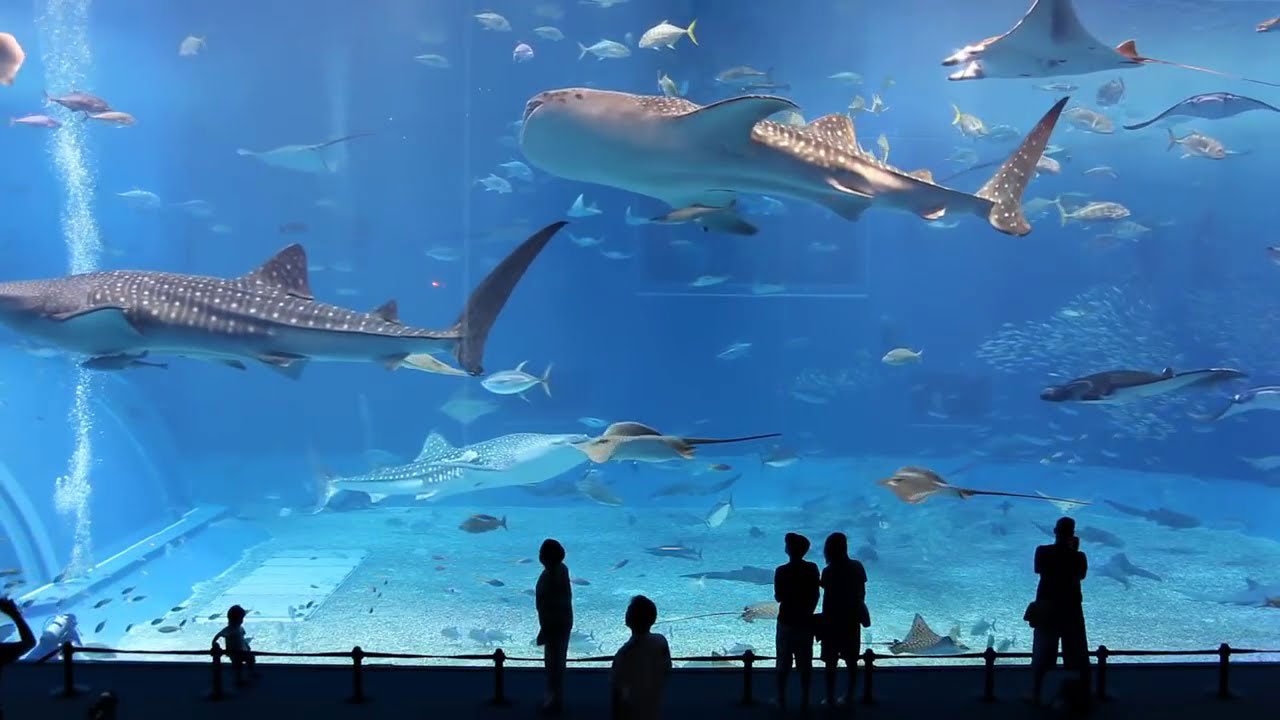 L’Oceanogràfic is a marine complex where different marine habitats are represented. Around 45,000 animals from different ecosystems live in this aquarium in 7 million liters of water. The aquarium consists of 2 main parts which are interconnected by a 35 meters long tunnel and the tank is filled by sharks and stingrays. 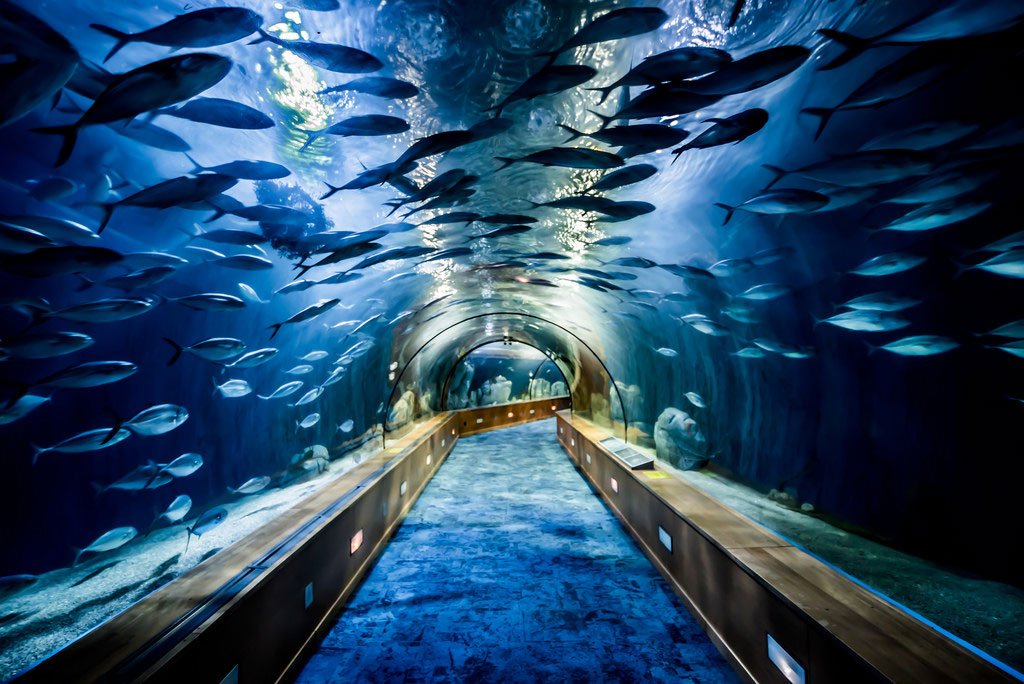 Osaka Aquarium Kaiyukan is located in Japan. Its biggest tank has 5,4 million liters of water. 29,000 animals from the Pacific Ocean live in this aquarium. In 2013 a “New Interactive Area” was opened to allow visitors to see the animals up close and maybe even touch them. 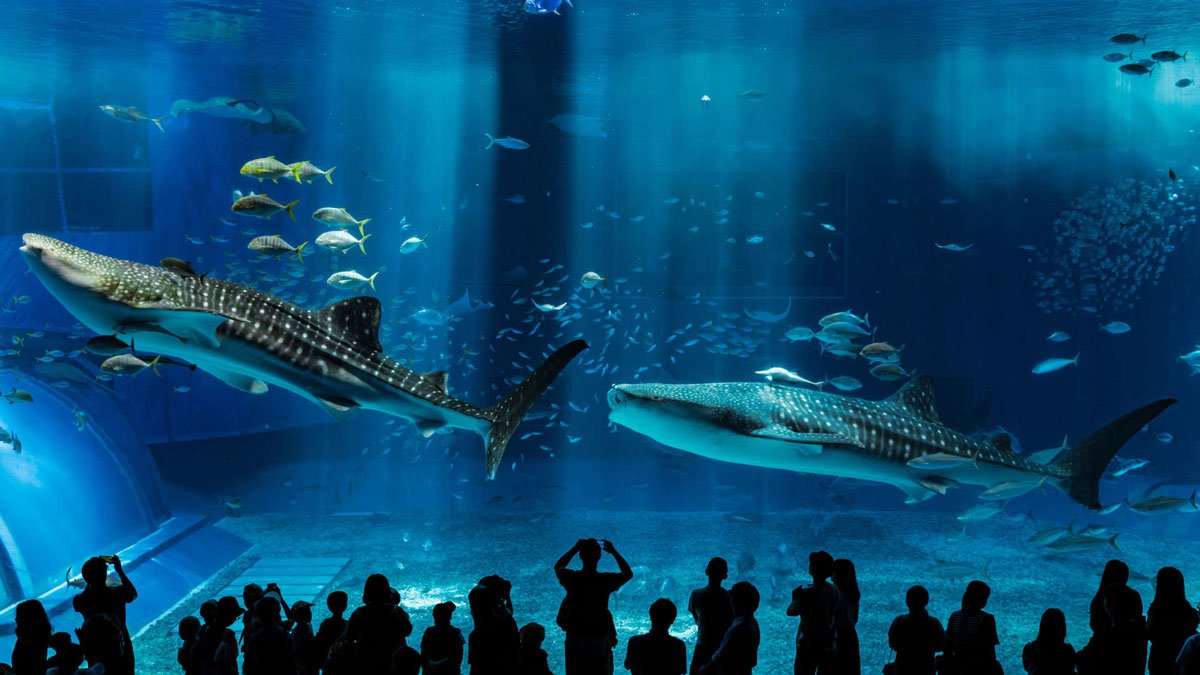 The main tank of this aquarium has 5 million liters of water and around 450 different species from different parts of the world. The main attraction is the ocean sunfish (or mola mola) which can only be seen in a few aquariums in the world. 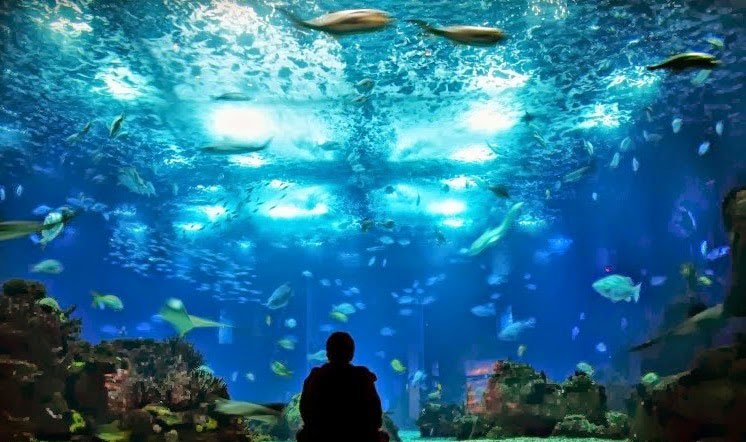 This aquarium is one of the few which can’t be found near a natural source of water but is placed in the Mohave desert. Its biggest tank contains 4,9 liters of water, which makes it one of the largest aquariums in North America. 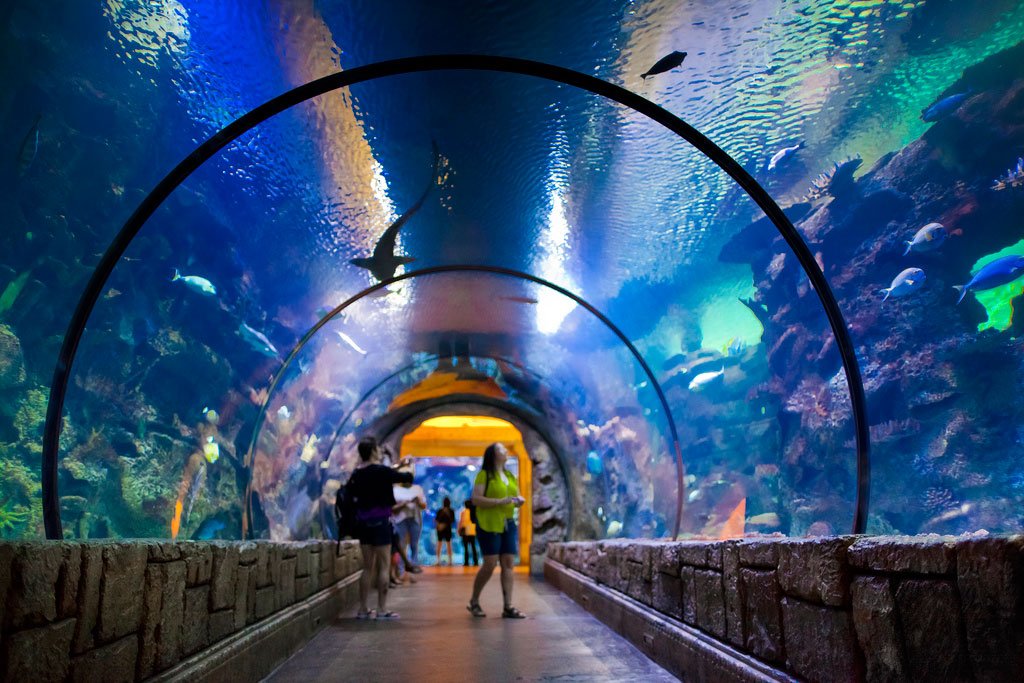 TurkuaZoo was opened in 2009 and it was the biggest aquarium in Europe at the time. The biggest tank contains 4,5 million liters of water and has 10,000 animals among which are tiger-sharks, gigantic river stingrays and piranhas. 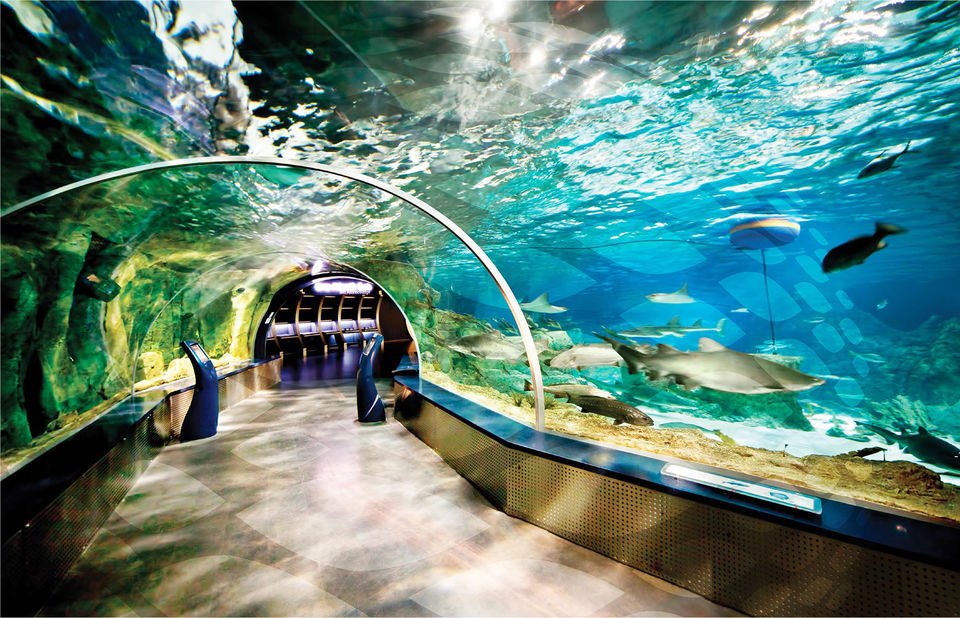